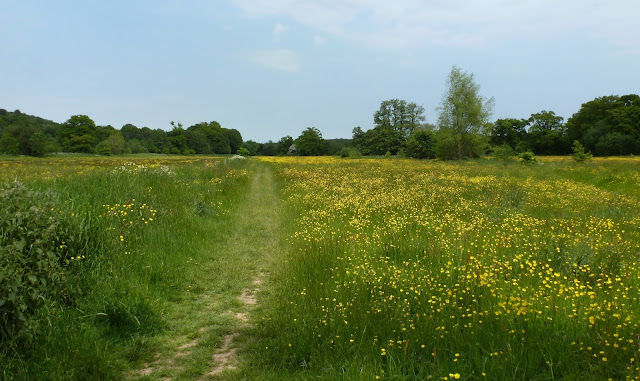 This path through a buttercup meadow behind Groombridge Place makes me want to say that it's a good year for buttercups, and perhaps because of the cold Spring, it is.

Robbie's comment yesterday questioned the attractions of sudoku. As it happens I have been thinking about them recently trying hard to explain the addiction to myself.  The rules are simple, part of the charm: each row, column and 3 x 3 block must contain  the numbers one to nine. There are nine block each with nine squares. Some of the squares are already provided with numbers. By a simple logical process of elimination you supply the missing numbers. What appeals to me is the the sense of things being connected which the process involves.  Again it is satisfying to apply logic to solving a problem. The pattern created by every sudoku , I find, has its own harmony. Coming to the end of the puzzle is like coming to the end of a piece of music with a resonant final chord which harks back to the those which precede it.

As children identify with the characters in books written for children, I find myself  more and more fascinated by Mrs Palfrey at the Clairmont, the Elizabeth Taylor novel about ageing residents in a Kensingtin hotel, which I mentioned the other day. Once I was Biggles or William Brown in Just William or the the Walker family in the Arthur Ransom books. Now it seems  I am momentarily one or other of the old people passing their last days in a sad London hotel, with nothing but a care home of worse to look forward to. Gloomy, not a bit of it. So precise is the observation, so acute the humour that I finish the book, sad though it is,  with a sigh of pleasure. Reality can be harsh and tragic but hilarious at the same time. Note to self: read more Elizabeth Taylor. What a shame  that this notable novelist should have the misfortune to share her name with a movie star.
Posted by Unknown at 6:05 pm