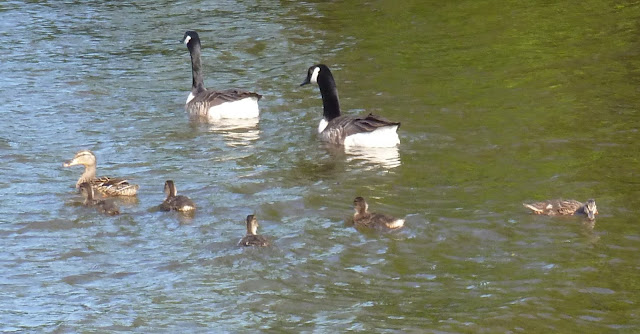 Ducks and geese on the Medway.

A woman informs my taxi driver outside the front door of Burrswood that the exit he is taking is one- way. She is wrong, A little further on the two-way drive branches to the left to avoid the one-way flow. Obediently the driver reverses and takes the long way round. He is Indian and speaks with the staccato intonations which witty people sometimes adopt to appear incisive. I point out that there was no need to turn. "It's not an issue," he says. " At least, there are more important issues."

In the supermarket a grey-haired man ahead of me in the check-out queue apologises for omitting to position the "next customer" sign behind his purchases on the conveyor. Such is the evolving etiquette of shopping.

The third and final part of The Cat's Tale on One Fine Day concluded and according to the statistics ignored by most regulars, I have just published the shortest short story yet. It is called The Eye and should take less than a minute to read. See http://www.hnjh.blogspot.com

"Apologises for omitting to position the "next customer" sign." Good lord! In my experience over here, omitting to position the sign is the rule rather than the exception, especially amongst men! I'm not certain whether they are simply unaware, or whether there is a deep-seated need to show off their macho-ness. But then why would they be seen, still alive, in a shopping queue?

I have always been struck by the fact that certainly at our local supermarkets men and women nearly always make a point of positioning the sign behind their purchases, and the beneficiary of saying thank you. The apology from this man was however unusual. It somehow seemed to fit the tweed jacket. I got the impression that he was trying to conform though what with I can't be certain. A book of new etiquette dealing with changes in society arising from technology - eg computers and the internet - seems to be called for even if its purpose is only to amuse.

There was a 'Now Show' on the radio when the invitation to the audience to contribute at the end was 'A good citizen always...' and one of the suggestions was '... puts the "next customer" sign after their shopping at the supermarket', which was greeted with much amusement. I always have a slight fear I'm seeming fussy or mistrustful when I do it. I suppose people are a bit ignorant about it here, but the cashiers are often slack about making sure there are adequate signs available too.

The other day, despite the positioning of the sign, I ended up paying for three large boudins noirs which were not mine - I alerted the cashier and the elderly couple in front of me in time, so the latter didn't have the disappointment of no boudin for supper and I didn't have to get through three of them on my own, which I probably could have managed given time enough... In that supermarket the signs are not very high and the conveyor belts narrow, and the shopping is processed with unseemly haste, so you really have to be quick off the mark, throwing everything straight back into the trolley and packing it into bags when you get to the car.