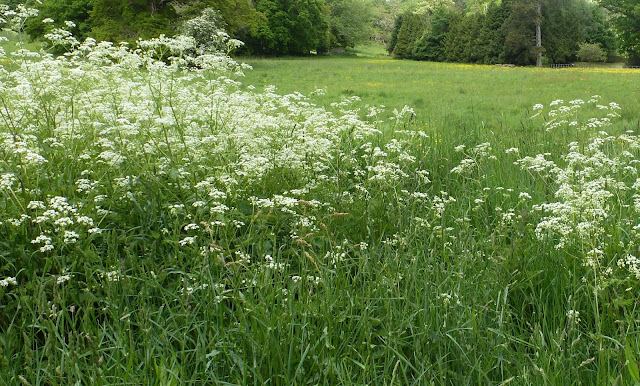 Lace or parsley? Until fairly recently I always thought of this plant as cow parsley which if course it is.  But then I noticed a number of people referring to it as Queen Anne's lace. When I checked it I found that it has numerous local names of which Queen Anne's lace is only one. Names like Adders meat and Devils oatmeal remind us that the plant was connected with the Devil,as Geoffrey Grigson reminds us in The Englishman's Flora.

Until I had a minor operation a couple of years ago I always thought of the word "wound" as depicting something inflicted by an enemy or by fate. It came a surprise to  discover that it is used by the medical profession for the incision made during an operation. Mine took a couple of weeks to heal and Dearest's will take longer. But I still can't get used to the idea of something with a benign purpose however drastic sharing a name with the result of a bullet's or a piece of shrapnel's impact.

Tom commented the other day on how angryfring it was to see big business desecrating our culture with soul-less, vulgar money-making devices. I was describing an absurd use of language to attract customers to a restaurant.   He did  not condone my sang-froid in the face of such abuse. I am not sure that I approve it either. But the starting point of this blog is specifically to look for beautiful things or at least things which deserve attention because they are interesting or amusing. Wherever possible I try to stick by the aim. The problem arises when a beef is called for. When that occurs irony must be assumed I am afraid. Ridicule too can be a powerful weapon to apply within what is admittedly a narrow focus.
Posted by Unknown at 5:25 pm