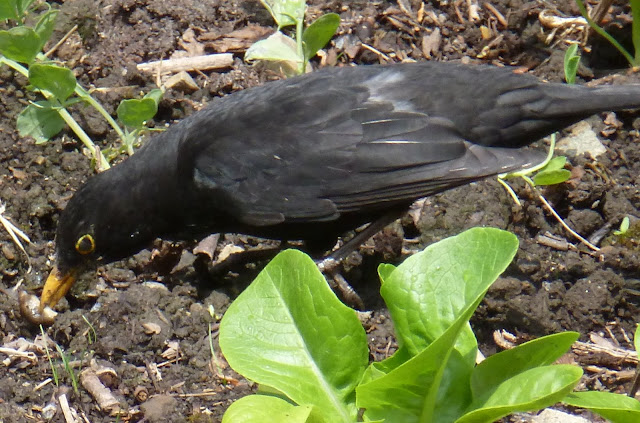 Following in the footsteps of the two-legged, wingless creature who is hoeing among the lettuces  Gordon the blackbird begins to capture his lunch. Such richness in the warm sunshine. What joy to be alive. To be young is very bliss. More of Gordon's adventures tomorrow.
My neighbour cuts down a  climbing rose which seems to him to be adding the finishing touches to the destruction of an old pergola. His wife is away. "She will kill me, when she comes back," he says. "I don't like roses," he adds.
Outside the hospital a notice reads "Smoke free building and grounds is our policy." Directly beneath and leaning on a railing is a woman in a nurses' uniform. She is leaning on some railings and puffing away like a steam train.
Posted by Unknown at 7:06 pm

An interesting choice of name for your blackbird. We have decided to call our squirrel Cyril.