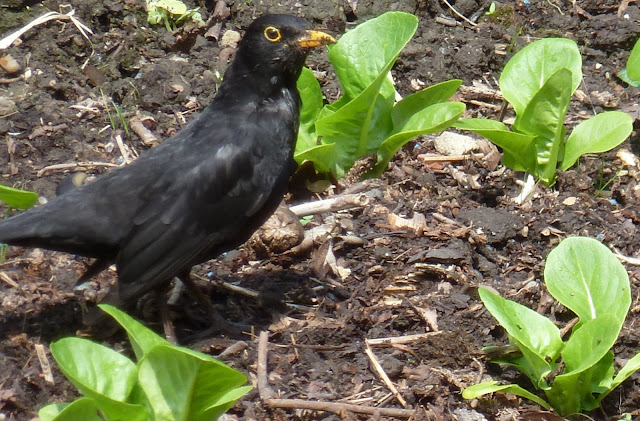 Just arrived among the lettuces. More photographs of the visit to follow in subsequent posts.

In The Grove, two squirrels chase each other round the trunk of an oak. They are playing like children keeping perfectly still when out of sight of each other. One has its nose pointing up the other hangs vertically from its rear claws. There is an element of calculation in the game which I find fascinating.

Of the many topics of small talk which people in service industries are told to introduce when dealing with customers, the best yet comes from a young man in the building society. "Are you doing anything else to day?" A question which begs a lot of questions. It beats by far others which I have  noted before such as: "Are you doing anything interesting thing afternoon?"
Posted by Unknown at 5:30 pm

If that be compost that I do espy around your lettuces, it won't stay that neat for long, not once your little friend gets a-hunting for worms. Love your short story about the squirrels. We have discovered a red squirrel in our garden - just the one. Well Lucy's seen it, not I. Every few days I leave him/her a few hazel nuts which he/she squirrels away somewhere.

I find the young man's question most amusing. One would be tempted to reply, 'No, I'm going straight to bed after this', but even that would be doing something wouldn't it?

Those lettuces are beautiful...makes me think of Edna Ferber's novel "So Big" in which Selena, the main female character, is struck by the beauty of rows upon rows of cabbages.

I just wasted some time waiting for the crows to come by. I need to know if they are crows or blackbirds. This one here can't sing "I did not do it". The evidence shows on his bill.