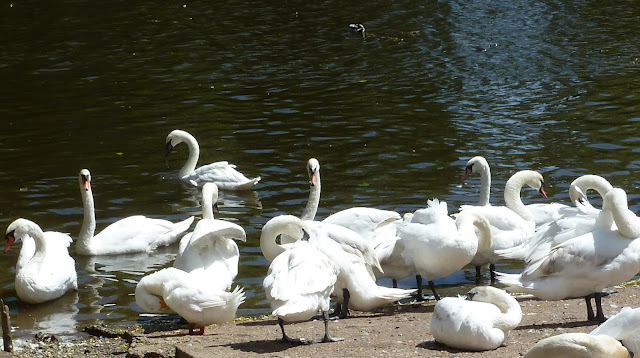 Swans on the Medway gather for a photo shoot.

"I love England," the Turkish taxi driver tells me. "I mean England, not Great Britain.
I reply that I thought I  detected a strain of Scottish in his accent. "I don't like Scotland. They are rude."
I tell him that my other half comes from Germany. "I don't like German," he says. "Have you been to Germany?" "Berlin," he says. "They are rude."
I suggest that people in big cities always seem rude. London, Paris, New York."  "Yes," he says, "New York very rude. I like Tunbridge Wells. People are very nice, very kind."

"I am never depressed," says Milo my retired gynaecologist neighbour through the grey, drizzling rain this afternoon. "But with this weather I feel like being depressed."

I think the swans have composed themselves very well and would be ready to perform at any minute.

I love the comment by Milo. Also, you're obviously living in the right town!

Lucas Funny creatures swans, they pose all the time if they are not composing a photograph, a bit like cats.

Tom Milo always was a little larger than life. In the last few days he has seemed quite a lot larger.