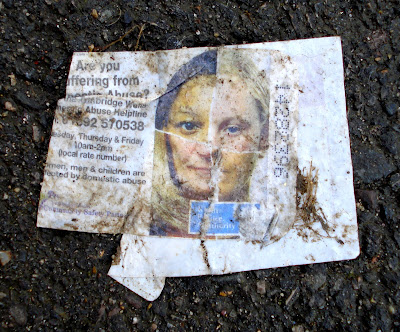 Squashed into the tarmac is this piece of ephemera, testament to the sadness of the age we live in. Is there a hint of something beautiful there, somewhere? I
hope so.

"Come and look at this," says Heidi, who was introduced to skiing when she moved to Munich at the age of 20, and loves the sport as I love tennis and cricket. And there, apparently for the first time in the Olympics is the extraordinary sport of  ski cross Four competitors race down a steeply sloping course, of the sort intended for snowboarding. As they reach the humps in the course, perilously close to one another, they fly through the air with immense speed and power, like characters in one of those balletic Chinese martial arts extravaganzas. Thrilling to watch, even to think about.

Puns I know are frowned on and I admit to frowning on the email circulars, which well-meaning acquaintances circulate from time But one pun, which I do enjoy in a recent email, concerns Sir Cumference, the roundest knight of the round table, whose weight is attributable to too much pi.

I think I may have watched the very same ski cross competition, the women's one where a young Canadian won the gold. Very exciting, as was the snowboard race last week. I love the comparison you make to martial arts.

The ski and figure skating events are our favourites while men's hockey turns us off with its violence thanks to the NHL players. Athleticism and artistry vs pure testosterone, it seems to me.

When I was ski-ing I never drank alcohol at lunchtime on the grounds that I needed all the coordination I could get. The exception was on Friday, the last day of ski-school, when two hours were extended to four, we followed the instructors wherever they led us and ended up at une pique-nique en pleine air with lots of white wine and schnapps, after which we set off down the mountain, four abreast on a track about as wide as that used for ski-cross. To be so close for so long was against all ski-ing instincts, since all eight skis were chattering side by side, unavailable for the movements that give turning and decelerating action. The sense of danger was there but not quite located in the head. You won't be surprised to know it wasn't a balletic spectacle.

We rather like it when they superimpose different skiers doing the course at different times onto one another, so it looks as though they are all racing together. Sometimes their bodies merge in ghostly fashion!

I love puns, and this was a good one; thank you.