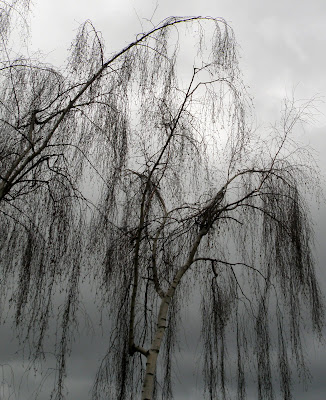 Silver birch on a grey day.

From round the corner in Berkeley Road, I can hear Paul, the gardener from opposite, brushing up leaves with a stiff bristled broom. Even if I didn't know what day it was, this sound would be announcing that it was Thursday, because Thursday is Paul's day to work there. The sound is of someone repeating the word "hush" at regular intervals. Hush, hush. As I approach our front gate, I hear an echo, an answering hush. It is the sound of Heidi sweeping the leaves from our front path.
.
On the sloping pavement of The High Street, a Council worker scattered grit from a shovel as he walked past us. This was yesterday. Snow was expected. But it didn't snow in Tunbridge Wells. It still hasn't. The magic grit has prevented it from falling. No one evidently forgets how a few weeks ago the Council was caught napping. No grit on the pavement or on the road. A pile of snow. Today the grit crunches awkwardly under foot on the ice-free pavement.

Interesting division of labour: I'm not sure I could get Mrs BB to sweep the leaves, however entrancing the ensuing noise.

What a delicate and beautiful photo!