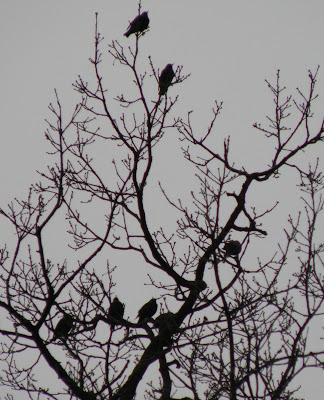 The Grove in winter.

In the icy wind, dead leaves dry and curled with the cold run wildly along the paths, as though they are on a half forgotten errand.

I seldom fill in questionnaires. And when I do, I am increasingly persuaded to tick the Don't Know boxes, where an opinion is required. The fact is that often I simply do not have the information required to form an opinion. I don't know who to believe. It is a beautiful thing sometimes to admit to ignorance when everyone about you appears to know the answers. I see today that 25% of British adults don't believe that the climate is changing. According to the same set of statistics,75% do. That leaves 0% who don't know. The sample clearly excludes me.

Lovely characterization of the leaves.

It is a beautiful thing sometimes to admit to ignorance when everyone about you appears to know the answers.

I agree. In general I have more confidence in people who can admit that they don't know something and don't just fake their way through their work or other areas of their lives.