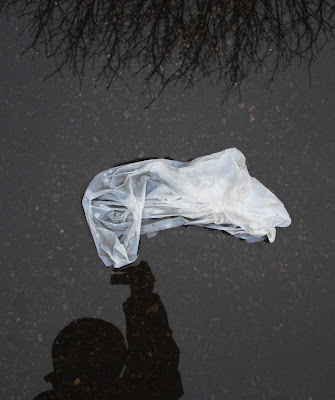 Not drowning but waving. On my word, this was not deliberate. I was holding up the camera to avoid my reflection and show the plastic bag floating on its own in the puddle. I like the way that the texture of the tarmac, on which the water has collected, looks like stars. The plastic bag, meanwhile, makes me think of the rubbish patches, mid-Atlantic and mid-Pacific, where ocean currents have collected acres of plastic in vast drifts. A recent estimate suggests that its density is in the order of 200,000 pieces of debris per square km.

Not so long ago, when the pavements were sheets of ice and the snow lay thick about us, I feared that I might run out of bread flour. The farm shop in The High Street was out of the type of flour that we normally use. Instead I ventured into new territory and bought something called Six Seed Bread Flour. It turns out to have been a serendipitous choice. I use it now in conjunction with my rye-based sour dough starter and ferment the dough for 24 hours. The result is a dark, nutty bread with an enduring substance, yet possessing a light crumb and crackling crust. Like all sour dough bread it doesn't easily go stale. The seeds, by the way, are linseed, poppy, millet, cracked wheat, sunflower and sesame.

Ahead of me, in The Grove a long, thin creature runs across the path. It could be a ferret or snake. I watch it as it reaches the adjacent bank where it perform a small leap as though it is settling in to a hole or capturing prey. But close to, it turns out eventually to be a strip of black plastic, which for a few seconds had forged a fruitful relationship with the wind. As I look at it, my finger caresses the camera in my pocket. But no, it has lost the brief life it had, and become no more than a wretched fragment, not even worthy of an ephemera photograph. It had its moment, though, I say to myself.

Oh, that IS an amazing and lovely photograph - how serendipitous!

And that bread sounds scrumptious, I love a good crusty sourdough and never could stand the soft white stuff, having been brought up on the dark ryes of northern Europe.

The ephemera series is indeed something extraordinary as this latest one shows. Amazing photo.

I would imagine this type of bread has beneficial side-effects other than taste. Was it Ex-Lax that used to be advertised via the slogan: Keeps you regular. Three words, does the job, can't be improved. And yet who remembers Ex-Lax when reviewing the great ad campaigns of yesteryear? The foam-clad horses from Guinness are an expensive parody in comparison.

What a happy accident with the photo!