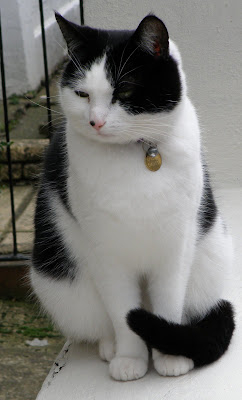 By the way, I pass this pied cat. How neatly it folds it tail over its paw! If it were a human, it would have been taught the habit by its mother as humans are taught good manners.

In the doctors' surgery a man grumbles about the health service. He is a gossip. He has a gossip's rolling eye. He speaks of another surgery, another doctor. He used to hand out viagra to any one who wanted it. He's in prison, he says as the present doctor opens his door and calls him in. When he comes out he walks over to us and says in a conspiratorial whisper," I'll finish my story. He got drunk, he makes a quaffing gesture,"and ploughed into a lot of cars. He's in prison now. It's a true story. He was a nice bloke, though."

From the top deck of a bus, I see on the roof of a bus shelter a small book. It is tattered and sodden. the wind nags at its leaves and turns them over. I can't quite see what book it is. As the bus moves on, the mystery ferments in my mind. Six hours later, it still does.

I've just found your blog via Box Elder. I am charmed by the 'three things' frame. Thanks for the writing!

The central story in today's blog is surely an attempt to prove that TW is not populated just by Telegraph-reading Disgusteds. I enjoyed the story and even more the speculation it engendered about how you memorised and/or recorded the dialogue.

As to the cat, it is denied the feline tendency towards smugness by the offset black dot on its nose. Whatever the occasion it is conscious of that dot and therefore cannot achieve the degree of separation from humans all cats strive for.

My favorite line, among many good ones here, is "He has a gossip's rolling eye."

That line put me in the room with everyone else, enduring his ramblings, trying to avoid eye contact with him.

BB The point doesn't need proving. Try The Hight Street on a Saturday night. But a bodyguard is advisable. I carry a notebook and was able to write down what he said as soon as he has left.