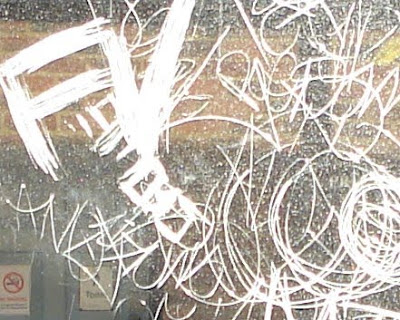 Valentine's Day used to be a chaste affair. People would send each other tokens anonymously. The recipients were expected to guess the source. Now couples seduced by advertisements, stare glumly at one another across restaurant tables. In the window of the Oxfam charity shop in Mount Pleasant, there is a display relating to February 14, which demonstrates that anonymity has been replaced by a sort of carnal leer. Apart from a giant heart-shaped cushion covered in red fabric, there is a copy of The Concise Kama Sutra, and another book called Pornography for Women, on the cover of which is the supposedly unlikely sight of a man hoovering a room.

Outside a neighbour's house V is seeing off her friend, B. B, who has just obtained a disabled badge to put on her car, proudly proclaims that she has been able to park for the last three hours on a single yellow line. Her car starts on the fourth application of the starter and the car, vibrates and moves unsteadily off. "She was a bit depressed yesterday, V tells me. So I invited her to lunch. It had been just one thing after another. The cat bit her husband on the hand. He had to go to hospital. But when they said they wanted to operate, he discharged himself. He didn't want an infection from the hospital" . Not knowing how to respond, I say, "I expect you cheered her up."

It would be interesting to hear if any of your commenters knew how to respond to that one. I certainly wouldn't.