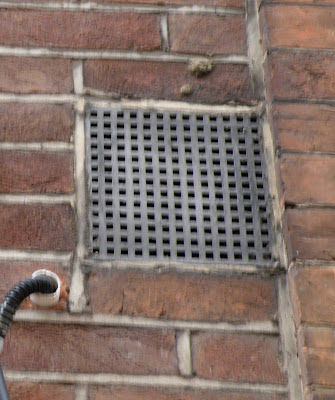 Today I finished reading Romain Gary's autobiographical account of his youth and early manhood. Half way through he describes how a girlfriend descends on him and his mother to demand that he marry her. Her reason?
'"He made me read Proust, Tolstoy and Dostoievsky," declared the unfortunate girl, with a look to break your heart. "What will become of me?
'She was right. I had made her swallow the whole of Proust, blow by blow,and for her that was as if she had already made her wedding dress. God forgive me. I had even made her learn by heart passages from Thus Spake Zarathustra. She was not properly speaking pregnant, but I had, all the same, put her in an interesting condition."

Outside Hall's bookshop I pick up a book called Austerlitz. I want to see if it is a copy of the novel of that name by W. Sebald, or a history of the the Battle of Austerlitz. I note that it is the latter and replace the book where I found it, horizontally on top of a row of books displayed upright on the open shelves. I half notice ,though,as I put it back, that the title is facing in the wrong direction. "Good afternoon," says the lady on today's rota in the shop. She has popped out for a smoke. "I respond with a comment on the improved weather. She laughs as though I am being too optimistic. "Well," I say defensively, "It's better than it has been. "I was only laughing", she says because this is the third time today that I have turned this book round the right way".
Posted by Unknown at 5:06 pm

Once I'd finished Proust I swore to myself that I would never urge anyone to read it. If ever there was a novel one should approach alone, this is it. On each re-reading this feeling has grown. This hasn't of course stopped me chattering about it in the hearing of Proust virgins. And on this basis my brother bought it and kept on ringing me up thereafter, enthusiatically telling me about the latest revelation. My near passive role in this had its own mild pleasures.

I'm still laughing over Gary's Mother's decision that he must kill Hitler. This bit encourages me further to read the book.

Sometimes chattering about Proust is as bad as urging others to read him. I am certainly guilty of chattering. Perhaps with a little encouragement, I have even urged. I do however urge you (BB) and you (CC) to read The Promise of Dawn. The title sounds better in French but I imagine that it reads well in any language. It is moving as well as entertaining. It was made into a film with Melina Mercouri.

That's an odd bit of synchronicity.

I was just a few minutes before, reading George Szirtes book 'Reel', specifically the poem in memory of Sebald called 'Meeting Austerlitz'. Like many of the poems in the book it is written in terza rima, and contains the lines, about Sebald

...he was the sole
patch of dark in the bright mid-afternoon.'

and, in the voice of Sebald,

'...We can distil
our terrors and make them hang like a grey mist
beyond the garden, somehow peripheral,

and I considered him an optimist
compared to me, though that's a matter of style.'

which I found pleasing.

I am looking forward to getting back to my Proust listening. I stopped a couple of months ago, just before 'Sodom and Gomorrah', I'm not quite sure why. I think I was about half-way. I'm very happy that you steered me towards it, though sometimes being urged to read things can be counter-productive, I suppose, especially when they seem weighty or daunting. Finding the way in with the recordings was a comfortable compromise.

Did you hear David Tennant on Desert Island Discs around Christmas time? It was his bookchoice to take to the island!

Lucy. Thank you for that enlightening and pleasing quote. W.G. Sebald has always struck me as an an attractive character, all athe more so now. Sebald's Austerlitz is written without benefit of punctuation. Although he was a much loved professor at the University of East Anglia his novels were written originally in his native German. He was killed in a car crash in2001.

I've only read 'The Rings of Saturn', which I liked very much. I didn't really know about him until after he died, so my impression of him is coloured by the knowledge of his death, as I think it probably is for many. George Szirtes also teaches at
East Anglia, and presumably knew him.

Did you see Andrew Motion's poem about him too? I think it was in the Guardian on-line, or perhaps the Times. I followed a link to it so I forget exactly where it was...

The Rings of Saturn, as it happens, is sitting on my desk waiting to be read. I will go in pursuit of Andrew Motion's poem. Yes, I did hear David Tennant's Desert Island Discs. I remember thinking to myself: there goes another one.

The Rings of Saturn, as it happens, is sitting on my desk waiting to be read. I will go in pursuit of Andrew Motion's poem. Yes, I did hear David Tennant's Desert Island Discs. I remember thinking to myself: there goes another one.