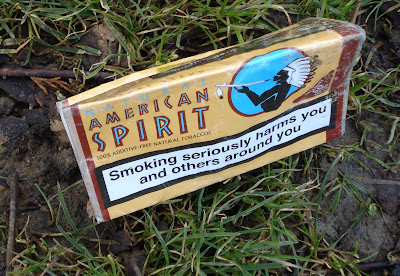 First ephemera in a series of photographs of ephemerae . When I was doing chimneys I was in danger of being a Johnie head-in-air. Now my eyes tend to be fixed just a few feet in front of me.

As I watch the final quarter of an hour of The Virtual Revolution on BBC 2 - an account of the effect of the Internet on our lives. There stays with me, in particular, the distinction made by sociologists between two types of person labeled hedgehogs and foxes. Foxes dodge quickly between objects of interest; hedgehogs tend to pursue one idea at a time. Research into Internet behaviour, perhaps not surprisingly, shows that younger age groups, brought up with computers at their fingertips, are more fox-like, while older people veer toward hedgehoggery. This is not the first time that the hedgehog and the fox distinction has been used to make a point. When I read War and Peace for the second time, I followed it up with a study of the novel by Isaiah Berlin. In it, Berlin invokes the proverb of the fox, who knows a lot of little things and the hedgehog who knows one big thing, in describing Tolstoy's point of view in the novel. His conclusion, in the context of War and Peace, is that Tolstoy was a hedgehog who thought that he was a fox. When it comes to the Internet, we are invited to ask ourselves whether we are hedgehogs or foxes. At first, I think that I am a hedgehog, but I now suspect that I am fox, who thinks that he is a hedgehog. Meanwhile, whether you are a hedgehog or a fox, you can't help being amazed, as Aleks Krotoski, presenter of The Virtual Revolution reminds us, that The Internet as been going for only 20 years! We are fortunate to be living at the beginning of so dramatic a transformation of awareness and knowledge.

Looking forward to this series of ephermerae, Plutarch!

Hmm, am I a fox or a hedgehog? Much food for thought here but I rather think both. A fox when I'm interested in a wide variety of subjects, perhaps superficially, but a hedgehog when focused on my main interests. I find it can be too easy to be a firefox and get distracted from being the hedgehog.

(By the by, did you know that we don't have those delightful hedgehogs over here, except as chocolates?)

Your bubblewrap-popping-orgy image made me laugh!

Argh, should spell check before publishing, I'm such a lousy typist! Ephemerae it is!

Cringing at the American Spirit brand and logo on the tobacco wrapper.

Feeling sorry for actual Foxes and Hedgehogs getting caught up in human attempts to explain
themselves and their habits, without so much as a "by your leave". ;-)

And laughing out loud at your bubble wrap
imaginings.

I love bubble wrap! And I think I must've read that Isaiah Berlin study at some point -- it rang really strong bells.

The bubble-wrap fetishists are coming out of the woodwork! Perhaps it was an important birthday for the man and he had promised himself a kind of 'all you can pop' treat...

Glad you picked up the fox/hedgehog thing. Have you done the test yet? I'm putting it off till the right moment, especially after reading one of the comments on the site which suggested that the time of day when one undertook the test might have a bearing on the result, that concentration patterns fluctuate. There are other possible types too, so you may not have to choose simply between hedgehog and fox.

I share the unspoken pleasures of bubble-popping but I think it has its darker side. To feel the bubble is a tactile delight, to note how its consistency changes when squeezed is another touchy-feelie thing but one can't stop there. The bubble must die to provide the complete experience. And when popped it looks definitely dead, worthless and unattractive; once a pleasure, it is now rubbish and its earlier state cannot be evoked from its present state. Heartlessly we move on to another vulnerable bubble. The man you saw was intent on bubble-o-cide.