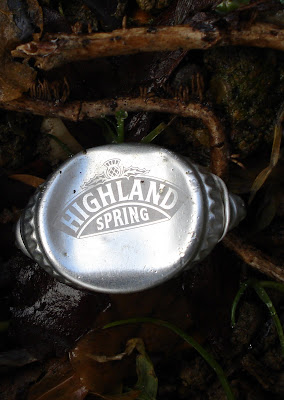 Ephemera 4. Highland Spring is the brand name of some bottled, spring water from Scotland. It appears boldly here on a used crown cork abandoned in a flower bed in Tunbridge Wells.

"Yes, the hair was a conniption that framed the fierce soul". I had to look up the meaning of "conniption". I owe the search to Holly Anderson, a poet, who uses it in a poem recently published in the web magazine ,qaartsiluni. At first I take it for a line in a longer poem, until I realize that it is one of a sequence of haiku called On Suzanne. The haiku, taken together, form a powerful elegy for the eponymous Suzanne. The seventeen syllables of each haiku are set out in single sentences each arranged as a single line. The haiku follow the prescription of Alan Ginsberg, who called this version of the Japanese form, "American sentences". I am grateful to Holly Anderson and qaartsiluni for the information on the American sentences form of haiku, for a touching and memorable composite poem, which I shall return to for pleasure and enlightenment, and for a new word. According to Chambers Dictionary conniption means a fit of rage or hysteria. Its origin is described as N American slang.

In pursuit of ephemerae, I stop on  in The High Street to examine what looks like a small, blue plastic box on the pavement. A passing woman dives into my gaze and picks it up. It incorporates a window and a button of some kind, but parts of it are missing. The word pedometer catches the woman's eye. "Pedo-meter" she says emphasising  the first syllable. "What's that?". I tell her, and she puts it on a ledge outside the shop.  Suddenly it is no longer a piece of discarded ephemera, but an object with possibly some residual value, and therefore of no interest in my present search.

I looked up On Suzanne. Thank you for writing about it. It's beautiful and moving; the language, the details seem to burst with the love and longing the poet has for her departed friend.

So "conniption fit", often found in novels about the Deep South, is a tautology. I'm surprised. The word sounds too precise to be blurred by repetition.

I wondered whether the pedometer-rescuing woman emphasised the word's first syllable conscious of yesteryear's scandal whipped up by The Sun. The newspaper was reacting to the creation of a paedophiles' register and its fulminations led an ill-educated lynch-mob persecuting a paediatrician. Given that there's no smoke without fire and it served him right for making use of something as un-English as a diphthong I'm sure your lady sought to prove she could distinguish between the pronunciation of the short e and its form ligatured (not sure about this word) to an a. Only in TW.