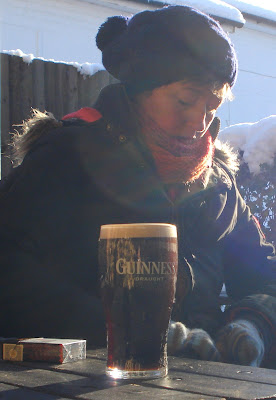 In the Winter sun.

At the cross roads at the top of Mount Pleasant is a notice which reads: "Chinese New Year Parade. 13 February. Expect delays 5 - 6 pm". A first for Tunbridge Wells?

Insignificant snow flakes have been blowing about the town like frenzied insects. But none has settled. Outside the town it must be different. As I walk up Mount Pleasant I see a pile of snow in the gutter that must have been shed recently by a car from the surrounding country. Walking down the hill a little later I watch as a deep wedge of snow slides off the roof of a black Mini-Cooper, which is just about to drive off. I remember how during World War 2, there was a joke or an urban myth or both, where some soldiers walking in The Strand in London were identified as Russian because of the snow on their boots.