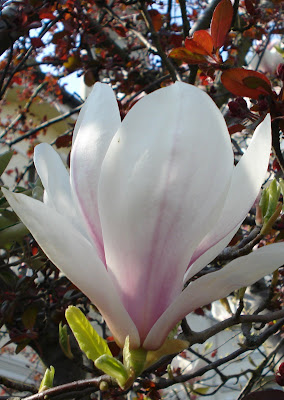 What more is there to say? This magnolia is just round the corner from where we live. Sometimes its early blooms are spoilt by rough winds or late frosts. But this year it opens in its glory, an exotic tree, which has found a home in these parts.

The other day, referring to a neighbour, I found myself saying, "he's 82, you know!" and I realize that age, which is important when you are very young - I remember being four and a half and letting no one forget it - has suddenly come to matter again.

It cast mountainous clouds of ash into the air, kept aircraft out of the sky and stranded travellers all over the world. Yet I doubt if many people know how to spell it, let alone pronounce it. Eyjafjallajökull, unless it causes further problems, will now probably fade from our memories;, unlike, it occurs to me, Popocatepetl, another volcano, this time in Mexico, which has a prettier name, and remains in the memory thanks to a poem by W.J. Turner. The poem begins:
"When I was 13 or so,
I went into a golden land,
Chimborazo, Cotopaxi
Took me by the hand ..."
and continues,
"...I stood where Popocatapetl
In the sunlight gleams."
Inspired by what seems to be the same number of syllables in the name, it occurs to me write a parody, replacing the names of Mexican volcanoes with Icelandic ones, but I cannot (apologies to Icelandic speakers) find a vestige of romance in the names, and Turner's poem is, after all, called Romance.

"Eighty-two" said in a fruity, mock old voice was a catchline used by one of the music hall comics who appeared on radio programmes called Variety Bandbox or some such. It was supposed to trigger laughter in a Pavlovian way and seemed to work with an audience less critical in those dim distant days. Someone asked me how old I was a couple of days ago and when I admitted to 74 he said he was surprised. But did not elaborate. My next birthday will have numerical significance: three-quarters of a century or, if the point is shifted, of one. It isn't a symmetrical number but it feels so.

The best bit about the ash cloud were the heroic journeys people made to get home. A taxi ride from Madrid to Paris; sequences of buses, ferries and trains. I hope they all took notes. Admirable fodder for blogs.

Those heroic journeys were only spoilt by the people who could only resort to whinging.