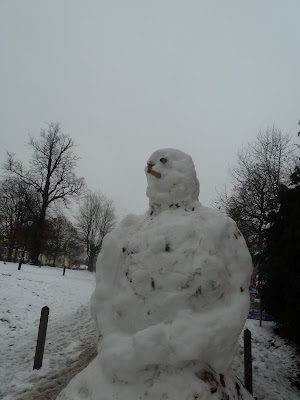 This snow giant at the entrance to The Grove stood about three metres high when I took the photograph a few days ago.  He is now no more than a mound of ice about a few centimetres across.

In the Nepalese restaurant called Mooli  I am served a large bottle of Nepalese beer beer called Kathmandu. It is, says the label, brewed in the UK, but  "brewed with Himalayan essence".  Essence? Just a thought perhaps.

On the clock on the computer screen as pips sound on the radio, on the final pip, the hour is recorded. A sense that clocks of one sort and another are working as they should.  It is not yet midnight. But when it is and not until then, Happy New Year everyone.
Posted by Unknown at 2:55 pm

Wishing you and Heidi a very Happy, Healthy and Creative New Year! Perhaps we shall meet again in 2011.

There's also a Lager called Khukuri ~ The Essence of Nepal. Perhaps "essence" is code for hops? A happy slide into the new year I wish for you and Heidi!

Happy New Year to both of you!

Happy New Year, Joe dear, to both of you.

Apart from being a song by Pete Seger Katmandu is a sort of tourism centre for those who choose to hike (a word I've always hated) in the lower bits of the Himalayas. There's almost certainly a McDonald there, perhaps a Starbucks, no doubt an ATM. Perhaps you can watch The Wire on your hotel TV. How should we distil its essence? It probably tastes like Kendal but more rural. You didn't say whether you enjoyed the beer.

Not exactly the drink to welcome in the New Year but I suspect you improvised later. All the best to you and Heidi

All good wishes to you and Fred M-L. Perhaps our paths wll cross.

Thank you,Rouchswalwe. We are rather keen on Nepalese food and beer in my view is the best thing to drink with it. I'll look out for Khukuri.

Thank you Carolyn, Nice to put a name to the first initial.

Dear Lucy, for many years my favourite narrative poem.
"There's a one eyed yellow idol
to the north of Khatmandu.
There's a little marble cross below the town.
There's a broken hearted woman tends the grave of Mad Carew;
And the yellow God for ever gazes down."

BB The essence of Kendal is easy: Mint Cake. Kathmandu was not as good as Tiger (from Singapore, I think) the alternative beer on the list, but it came in a big bottle (more festive I thought). The label is a masterpiece of purple prose "Welcome to the exotic kingdom of Nepal, a valley blessed by the gods, surounded by the glorious Himalayas. Feel the mysticism of the East where the hospitality and the smiles are abundant ... brewed with special Himalayan essence and the spirit of life itself." The lines do not stray entirely from the practical. "Best served cold", they conclude.

“This is imformative blog”
tunbridge cabs