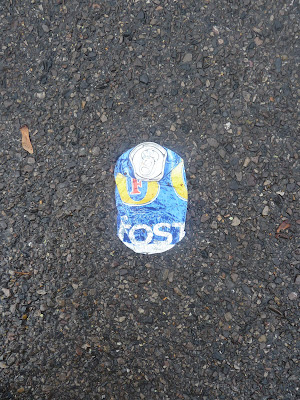 Although I stopped adding to my series of photos of discarded packaging, I couldn't resist this flattened can lying in  the road.

Although there is an endless list of words to describe  having been drunk, there are some currently in fashion, which are of special interest.  They seem as a rule to be used as a boast rather than an apology by men as well as women, and possibly even more by women than by men. They seem to reflect the current attraction to intensive drinking as a pastime, or if it were not for the almost sacred regard which we have nowadays for sport, you might say as a branch of sporting activity. For the time being the words "plastered", (not so new perhaps), "hammered" and "wasted" come to mind. In the meantime I ask myself whether it is possible to separate the great game of football from unrestrained drinking. Even watching a game on the TV, it seems somehow out of order to accompany the activity a case of canned lager. "Canned", there's another word for the asking.

There can be only one beautiful thing about the virus affectionately called Winter Vomiting, and that is recovering from it, which is what I am doing now. Flattened, that is what I was. In the past even when stricken with flu I have managed to read, but for the  last 36 hours I lay like a vegetable staring at the ceiling and praying to be left alone and in silence. To be human and even old, 'tis very bliss.
Posted by Unknown at 11:31 am

Brilliant - maybe you ought to start again? Please.

Are we your commenters victims of a bit of over-zealous editing?

Hi, Dave. I posted by mistake before I had finished. Happy Christmas.

Hi Barrett, it must be the weather keeping everyone at home. This is as close to conversation as blogging ever gets.

Endowing winter vomiting with initial capitals is honouring it to excess. In my mind's eye I imagined your post printed out on a galley proof, saw myself putting oblique strokes through the W and the V, and then - fastidiously - writing l/c twice in the margin. Once this was at the heart of what we did, now it is a forgotten ritual that types us as Old Codgers. Query: Cap O and C, or lower case?

Sorry about the hivernal ailment. At least it's out of the way ahead of the seasonal feast.

On this side of the pond, "canned" is already taken, slang for being fired from one's job.

Glad to know you have recovered, Joe.

Glad you are better in time for the holiday feasts, Joe! Interesting how the all words of your title can apply to that dreadful feeling of your illness, not just to squashed cans and drunken states.

Thanks for cheering comments. Caps in that case, BB, might have been called for out of respect for its devasting impact, but I would have bowed to the blue pencil