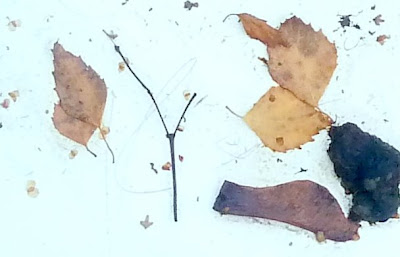 Chance arranges these leaves and fragments captured in a skip on wet day and fixes them loosely on  a piece of white board.

In a pretty book called Paris l'instant by Philippe Delerm with photographs by Martine Delerm, I read a discription of someone cycling in Paris in the spring, when "the horse chestnuts display, only with parsimony,  their first, sugary leaves," and the "traffic sounds swing like a song by Charles Trenet". She bends down to attache  her bike's security chain to a  pavement grid and senses the "humility" of the metal worn by the passage of so many feet and, now, warmed by a sudden burst of sunshine. She makes the distinction between happiness (bonheur) and the sudden feeling of elation (allégresse)  brought by that  moment. I am attracted to this book and this piece, in particular, because the text and the photographs  are precisely what I try to achieve in Best of Now. Thank you Philippe and Martine whoever and wherever you are, and thank you  to Hall's Book shop in Tunbridge Wells for having the book on the counter, (chance again) on my last visit.

A visitor has studied the art of massage for several years and practices the therapy where she lives in Munich. She tells me that a French woman client was so pleased with her treatment that she booked a second session, asking at the same time, if she could bring her partner. " I am afraid we only treat women" she was told. Her response, and plea for an exception to be made, "but he's gay, he's gay...",  apart from making me laugh, strikes me as begging  the question - a phrase too often misapplied nowadays.
Posted by Unknown at 6:17 pm

I am particularly struck by that use of "humility" which somehow contrives to be both vivid and familiar. I suppose it's an example of anthropomorphism, an impulse that rarely comes off as writers try to endow the non-human world with qualities that they think will make it easier to understand. Most fail, especially if they involve animals. It works here because it's impossible to patronise the metal grid. It works for another reason too - it has a special delicacy for me, at least. Well spotted, on your part.

I love that description of Paris in the Spring. It sounds a great book.