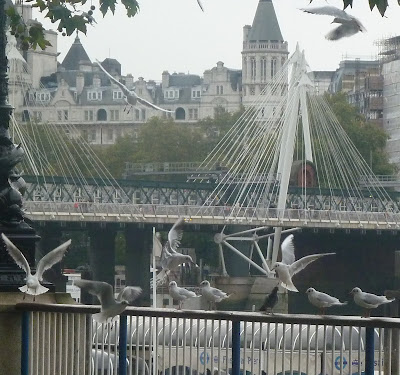 Seagulls, river gulls you might say, on the South Bank of the Thames opposite the foot bridge and railway bridge the lead over the river to Charring Cross Station.

In The Grove this morning an energetic dog races from one side of  the park to the other, chasing every squirrel and pigeon in sight. She misses a squirrel by inches. The squirrel scrambles up a tree. The dog yelps and scratches at the trunk. "She can't resist squirrels, " says he owner. Surprising for a creature with such energy, she is five years old. "She's part whippet, " says the owner, which explains the dog's astonishing speed.

While we are out yesterday, Parcel Force leaves a note to say that it had a delivery for us. The card which the driver left, instead of offering to redeliver, which is normal procedure, indicated that we had to collect the parcel from the Tunbridge Wells Post Office, at the other end of town and notorious for queues. Telephone calls to Parcel Force were greeted by a recorded voice which spoke of a conveyor breakdown (irrelevant) and made it clear that if you wanted your parcel, you had to go and pick it up yourself - a departure from usual practice. By the time I reach the post office, I am beginning to be cross, and become even crosser when I see the length of the queue. I see an employee carrying some parcels and ask him whether I have to queue to collect my parcel. "Yes," he says. Then seeing steam rising from under my hat, he says, "do you want to complain? "Yes," I say. But then, and here is the beautiful thing, I tell myself, "smile, what ever happens smile!" So I smile when the manager approaches. "You should be in the queue to collect your parcel," she says. I smile. "Tut tut, " I say. "You wouldn't want me to rejoin that long queue," I say. "And lo, she smiles, and says she will have a look for me. She does, the parcel appears, and suddenly my fury has faded with the fleeting compensation of a tiny victory.

Ah, the little white lie and a smile for a woman won the battle :-)

I am transfixed by trying to imagine the nature of that hurriedly mobilised smile. It can't have been self-evidently sincere, surely more of a rictus, a word I have a belated need to verify ("An unnatural gaping grin or grimace." OR "The size of the opening of a bird's beak or a fish's mouth."). Perhaps not a rictus, then. Not that I'm suggesting any further analysis. It worked so don't try to fix it.

At the bottom of all this are some dimly perceived threads connected to our different approaches to the subject of embarrassment. However, let's take the butterfly off the wheel and dwell happily on what I would describe as a major victory. How often does overt planning, however impromptu, work in human relationships?

I was afraid that I might have given the impression that the smile was hard to summon. In fact I don't think I can smile to order. In this case I was first of all disposed to smile because the post office man I spoke to was immediately sympathetic, and I was easily able when the worried looking PO manager arrived to see the funny side of the saga - the blame-passing and the confusion, some of which I didn't bother to relate, before I climbed the hill to the Post Office. I drew the lesson that it pays to be friendly when complaining and to see how ridiculous institutions and infrastructures can be.