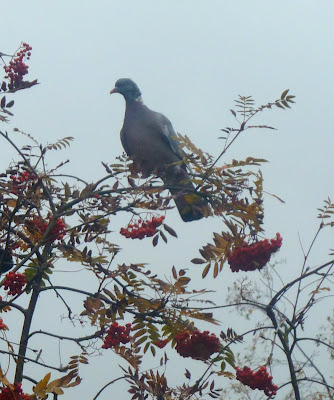 Pigeons, like this one, have  now stripped all the berries from the rowan trees. The leaves, too, have finally succumbed to wind, frost and snow. It seems only a few days ago that I took this photograph.

As I walk down Mount Sion I see a woman coming up the hill towards me. She is carrying a bag of shopping in either hand. I don't think I know her. But her smile, which probably mirrors mine, says: "I don't think I know you, but it is a time of year, when a faint smile is in order as you pass in the street, on a cold damp afternoon, as the doors in Advent calenders open, in the weeks before Christmas,

An alternative to translating a poem, is to write another and to use the term "after" in the title. This thought is prompted by  a poem called A Herbal by Sheamus Heaney "after Guillevic's Herbier de Bretagne. I knew nothing of Guillevic who was a  French poet better known in France than in England. I, for one hadn't heard of him. It is through  Lucy Kempton, to whom I mention the Heaney poem that I owe the knowledge that Guillevic died only recently.  For all I knew he might have been a medieval herbalist. I am assuming now  that the Herbier is in fact a poem rather than a herbal but, while I plan further research when there is time, I am becoming increasingly fond of the Heaney poem. Good things come from translation and well...from acknowledged  imitation.
Posted by Unknown at 5:03 pm

Especially love your pigeon photo.
In touch with your inner J.J. Audubon.

Another of those ready-made novel titles that your life is enriched by: Faint Smiles on Mount Sion. Or possibly an ode.