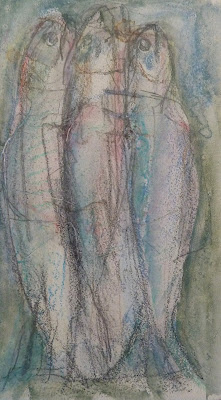 This drawing of sardines is made on a sardine tin sized piece of something called textured clay board, which I received as a sample about four years ago. I started the drawing then and only finished it when I came across it the other day. The clayboard gives you a white mat surface which you  can draw or paint on and scratch to erase. I submit it, though it is entirely irrelevant,  as a tribute to St Stephen upon whose feast which falls to day Good King Wenceslas looked out.

Yesterday pleasure was in the order of things. And my greatest pleasure I have to admit was preparing Christmas dinner, for which purpose I rose at 6.30 am. We sat down - six of us  - to the meal at 5pm. When asked whether I enjoyed the food, I realized that the best part of it for me was in the preparation. The high point perhaps was  the appearance of the sprouts, about the size of a large blackberries, which I had taken from the stalks earlier, and trimmed that morning. I thought that they looked a bit miserable before cooking but the sight  of the little things when they came out of the saucepan, uniform in size and emerald green, would have pleased the most exacting of chefs. It was of little interest to anyone else, but for me, to had grown  the sprouts in the first place - the plants were set out much to late in the season - and above all to have preserved them from the hordes of marauding pigeons which live nearby - were reasons for great  personal satisfaction.
Posted by Unknown at 12:59 pm

Love your sardine drawing.
A man of many talents!

Those sardines look real and also have the look of things that were once alive. Good drawing and well photographed too.
Joyce loved the photograph from 22nd. December.
Hope you are enjoying Boxing Day evening.

a very nice drawing ... do you have a favourite way to eat them ?

One might have imagined the sardines being subjected to the Procrustean imperative. But no, their heads and tails appear complete.

My niece shares your sense of the pleasures of the kitchen. Having prepared an elaborate dinner for her family she finally ate nothing. But felt replete in another way.

Congratulations on the sprouts. I don't know why everyone says they don't really like them, I think they're wonderful vegetables, not least because they make the very best bubble-and-squeak on subsequent days! But yours sound to exquisite to be thus pulverised, so I hope they were all eaten up every last one.