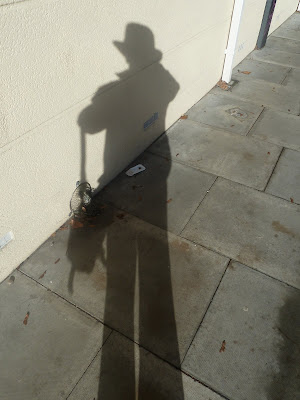 Up the wall. Portrait of the artist as an old man.

Last winter just at the time of the thaw following the heavy snow, we received  from Germany, a gift from Heidi's cousin,  consisting of two pairs of rubber mounted metal studs to fit over our shoes to wear in icy conditions. They were too late for that freeze. But this morning after last nights rain had frozen on the un-melted snow creating slippery conditions again, we venture forth, and march upright  over the icy paths of The Grove.
Posted by Unknown at 4:32 pm

The shadow suggests that you go around TW on stilts. If that's true and you combine stilts with that leather hat, I'm amazed you are able to get those sneaky Cartier-Bresson shots you do so well.

Another possibility is that you are actually taking part in a spaghetti western but that too seems like a counter-productive act of ostentation.

it is easy enough to mistake the shadow for the person to whom it is supposed to belong.