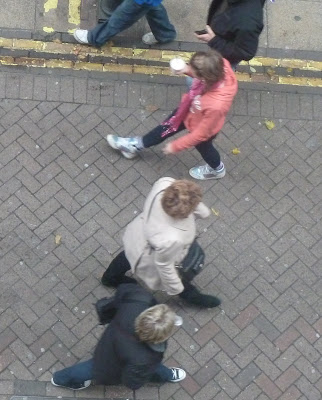 One of my favourite London streets is Villiers Streets, which runs from the Strand towards the Thames encountering Charing Cross underground station on the way. You can look down on the narrow street  from the walkway which leads from the pedestrian bridge over the river, into Charing Cross main line station. Vehicle traffic is now excluded from the street, where, according to a blue plaque, Rudyard Kipling once lived. From the walk-way you can look across at the buldings opposite and down on the heads and feet of pedestrians. There are worse ways of passing the time while waiting for the train to Tunbridge Wells.

I find myself walking behind a neighbour on his way through The Grove. I know him for a man who rarely looks to left or right. I suspect that he does not enjoy walking. He wants to get to where he is going and back, especially back,so that he can sit down comfortably at home. This morning he walks past a dog tethered by a red lead to the railings of the play area. It is the dog, part whippet, that I saw yesterday careering after squirrels. She is straining at her lead now, longing to be free. As my neighbour passes the dog she wags her tail as though by a reflex. But he doesn't notice. A minute later I stop to say hullo to the dog. It's owner waves from the swings where she is playing with her two children. "Hullo," she says to me.

"Everyone is different", says a woman to her child, as they come round a corner in front of me. "Yes," says the child.
Posted by Unknown at 5:04 pm

Home of London's scruffiest but most medieval wine bar. Or it used to be.

The bar is still there at the end of the street, and adjacent to Embankment Gardens. In the summer you can sit outside on the pathway beside the gardens. I haven't been inside for years. You used to be able to buy Sherry drawn from casks behind the bar. Dark alcoves made it a favourite spot for couples who wanted to keep out of public view.