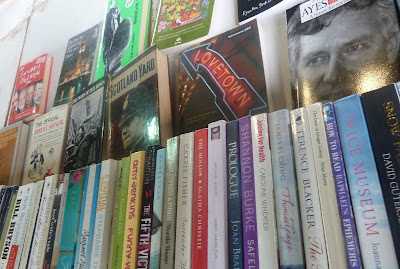 A mosaic of books on the South Bank of The Thames.

The three rowan trees in Berkeley Road, a few days ago, bright with orange berries, have been stripped bare, not a berry in sight. The gang of blackbirds meanwhile  largely responsible for the disappearance of the berries, are still around, searching the grass beneath the trees for any that may have fallen.

For the first time that I can remember the bread dough I had left to ferment did not rise. The starter which I had used had been in good fettle, foaming with life, and could not be blamed for the problem. The kitchen, where the radiators were not working, was clearly too cold to wake the yeast from what became a prolonged slumber.After transferring the dough to a warmer place, the yeast was still unmoving  and unmoved after 18 hours.
Rather than waste it I  put some brewers yeast in a cup, stir  it, wait until some bubbles appear and then, with a little more flour, mix it in to the inert dough. Heidi and I take it in turn to knead it, rather than rely this time on the food processor.  Six hours later the new dough rises proudly and after proving produces two large and beautiful loaves with a perfect, even crumb and crunchy crust. And that nutty slightly sour taste which you look for with long fermentation.