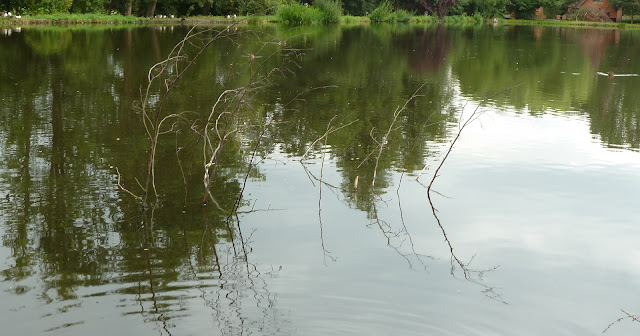 Hoping for green in this still, grey winter I  borrow a photograph of the lake at Groombridge  from the archive.

It stikes me in considering the animal kingdom that  I favour other mammals  against insects, reptiles and the like. Even birds have a cold nature I suspect. I think I must be a "speciesist". Is that a crime?  It will stand against me probably when insects with large brains invade our hard-won civilisation.

At the  supermarket check-out a  young man with a pigtail is in an unusually talkative mood, even allowing for the fact  he has clearly been instructed to make small talk to customers.  He wants to know if I am "doing anything this afternoon?" A good question which I do not begin to answer as he tells me that he will probably being going straight to bed when he has finished work, because he went out for a meal last night to celebrate the birthday of his girlfirend's mother. I thought that I might tell him what I was thinking of doing this afternoon, but there wasn't time.
Posted by Unknown at 5:18 pm

I see that Lucy had this problem with your refurbished blog too: an inability to access the comments feature during the first pass.

In my case it seems to appear if one uses the "back" arrow (top left corner) and then re-selects Now's The Time.

At our supermarket I do the asking. But only of certain check-out operators. If that question were put to me I'd have to lie. The truth would sound too pretentious. Perhaps it is pretentious.

It seems to be working now.

Whereas I enjoy the exchanges sometimes I am disturbed by conversation driven by duty. Lovely when it bubbles up spontaneously.

I must be standoffish or something but I'm afraid that does strike me as rather nosy, I don't even ask my friends that kind of question for fear of seeming to want to muscle in on whatever they might be doing! Come to think one might feel more comfortable asking a complete stranger from that point of view... Anyway, he sounds as though he only really wanted to speak about himself anyway, or perhaps he just needed to keep talking to stay awake.

Having to pass time before going to the dentist, I went into a Starbucks and ordered a latte. The man behind the counter asked me my name. And when the coffee making expert gave me the drink he called my name.
All these examples seem to point to a growing corporate need to treat grown people like kids.