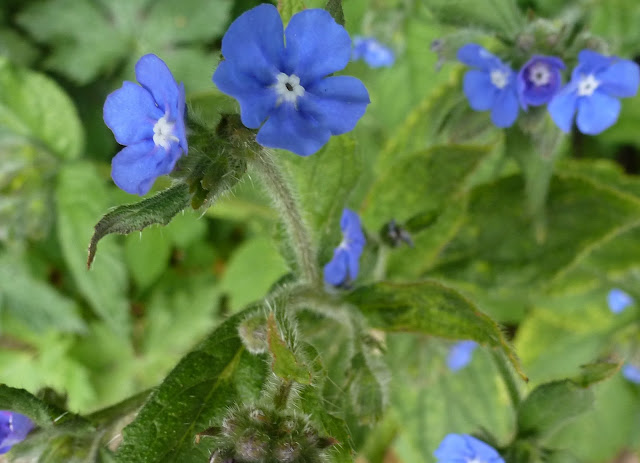 At this time of year alkenet (strictly speaking evergreen alkenet) is abundant round here  and sometimes rampant so that gardeners far from welcoming it regard it as a weed. I tend to herd it to the back of flowerbeds where the bright blue flowers produce a pleasing contrast with  self-seeded yellow Welsh poppies. Both are uninvited guests in our small garden but welcome if they behave themselves. Both are self-seeding and I root them out a short while after they have flowered they return every year, sure of their return. As I have said before in this blog the word Alkenet is Arabic in origin  and comes to us via the Spanish alcanna. The Arabic word  is al-henna which  betrays the closeness of its relationship with the plant from which the colouring agent, henna is derived.

You don't have to look far for evidence of design either intentional in the way machines and to take another example furniture  are made to suit  function or the appearance or both; or as  the result of trial and error in natural selection. Design is rarely if ever perfect either manufactured or evolved. The need for improvement is ever present. The thought crossed my mind when  dealing with a tea bag in a cafe the other day. No where to put it, once fished from the cup. Not in the saucer because it leaves a puddle which will inevitably drip next time  you pick up the cup.. More design thinking in respect of cup, saucer, tea bag please. Meanwhile evolutionary forces might consider their recent  "master work" homo sapiens. Good marks  for adaptability but built-in obsolescence, which among other weaknesses such as territorial obsession, irrational greed and pugnacity, must earn it poor ones.

An avenue of 100 oak trees  near Launceton in Cornwall, planted to celebrate the millennium and intended to last 1000 years is, 12 years into its planned life span,  to be destroyed to make way for houses and a hotel.  I don't know  why but this piece of news disturbs me rather more than many of the other horrors shown  to us daily on screens and in newspapers, but it does.
Posted by Unknown at 5:41 pm

It is almost unbelievable that the avenue of oaks is to be destroyed. I have to agree with your final sentence, all the way. Maybe it is because it is such wanton destruction lacking any cause except making profit.

Apparently the proposals have challenged by protestors. But the developers speak of all the jobs they will create!