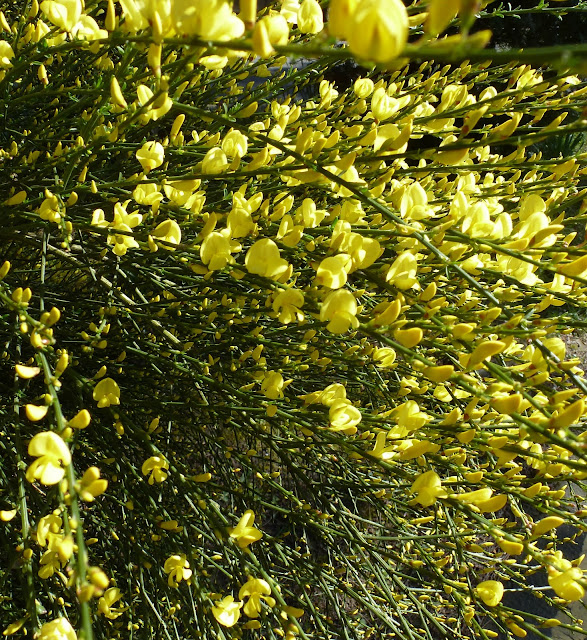 Ginesta or broom. The scent hangs ahead of you and greets you as you walk past the shrubbery in Berkeley Road.

The builders talk on the scaffolding of the new house which is taking the place of the old one next door to the vegetable garden. They discuss the  things they are afraid of. Echoes of Winston Smith and Room 101. Hush, Big Brother could well be taking notes. "Frogs," says one. "Spiders," says another. "Dogs," says a third. "Especially when they jump up on you. "Dogs don't like me," he adds. "They know I'm coming a hundred yards down the road. And I know when one is there."

"Faced with the choice of reading a run-of-the-mill novel and raking leaves in the garden, I would go for raking leaves," writes J M Coetzee in a letter to Paul Auster in their recently published correspondence.  A bit toffee-nosed, you might say, but perhaps forgivable when  later he admits (according to the reviewer)  to spending hours polishing pieces of prose. "Few readers," he says, "are going to appreciate what goes into getting a paragraph right." This one does. And I know another one  who probably appreciates it even more than I do.

The Guardian carried a review of this book. Both emerged as somewhat egg-headed and their exchanges lacked any traces of gossip, other than about soccer. I think I've tried Auster (though not very hard) and I came away with the impression that he was rather precious. But it was a long time ago and I may be unfair.

I agree about getting paras right; also about deleting them when they suddenly become surplus to requirements. Re-reading my second novel under its new title (Out of Arizona) I found several several paras that deserved the chop and will get it. But to my astonishment I came upon a three-page passage which I'd completely forgotten. It had been lifted more or less word for word from a recent personal experience and must have been added very late in the day. I wonder if in fact you ever saw it.

Broom was added to the NZ environment with the best of reasons (as rabbits were to Oz) and everyone has lived to regret this. Invasive, as you gardeners would say.