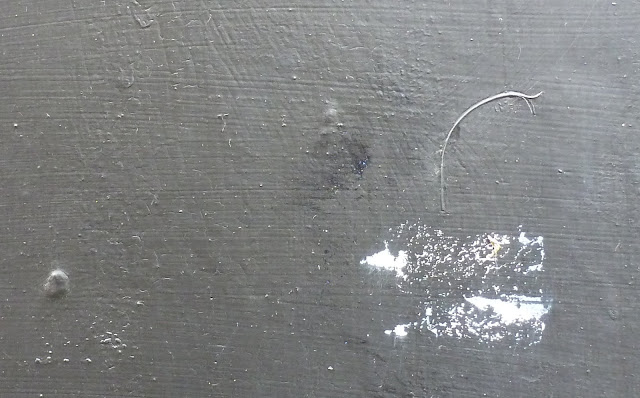 Texture again. I am tempted to crop the left hand side to concentrate on the organic shape, a stem perhaps, embedded in paint  on the right. But for the moment the bubble on the left seems to balance the composition. I suspect that some people find these abstractions puzzling if not unattractive. May be. But I am not deterred. As William Blake wrote, "If a fool persists in his folly, he will become wise."

Tunbridge Wells had its football moment on Saturday. Tunbridge Wells FC was through to the final of the  FA Vase, a competition for amateur teams. So Wembley was the destination of  a rumoured 11, 000 supporters from the town. Never mind that their opponents Spenneymoor, Co Durham won 2- 1. To my shame I didn't realise that the game was on, having given up on the local paper long ago. As  it was we were lucky. We had postponed a planned visit to London for reasons unconnected with football. If we had tried to go through with it, we would apparently have found neither a seat not standing room on the train.

After the rain and cold with which Spring kicked off, the idea of watering  the garden and particularly the potted plants which are today in a sprightly mood, seems strangely out of   place. But I find to my surprise that the soil and compost is already dry and ready for the watering can.

I've sometimes wondered about a connection between 'mince!', still very common to hear, from young and old alike, and assumed to be simply an alliterative replacement for 'merde', and the idea of 'minced oaths', and 'mincing one's words'. Is it simply coincidence, or some kind of false analogy? I've not done any research on the matter, which I easily could...

Lucy I would love to know. I am trying to register as many swear words as I can at the moment.

Out the other day I twice heard 'crotte!'- once as my friend's advice to her little boy as to what he should say to his amoureuse should she prove unkind, and the second time from the waitress when she spilled our hot chocolate into the saucers. I'd not heard that before. 'Putain!' continues to be popular I think.

In milder oaths, I never remember hearing 'Zut!' other than in school textbooks; 'Bof!' is frequent but is really more an exhalation than a swear word. What was that funny multi-syllabled one we used to know with, perhaps, some 'p's in it and ending in 'ette'?

I looked up minced oaths, but found no clues so far.