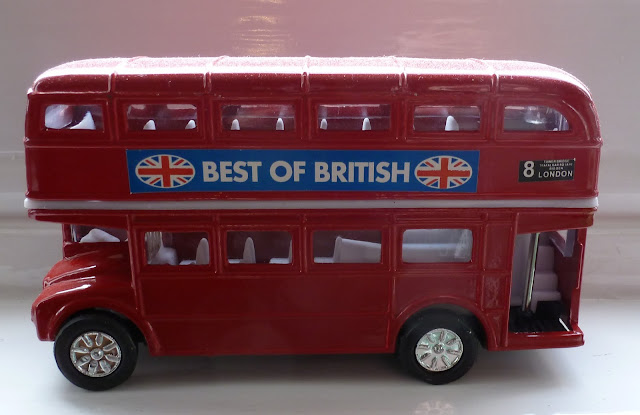 The  London Routemaster bus which came to me last Christmas, courtesy of Santa Claus. From being on the mantelpiece in my study it is now parked on the window-sill. For many reasons it reminds me of my youth, particularly jumping on to the rear platform when the bus was gathering speed, to save waiting for another; or leaping off at traffic lights to save extra walking and in cheer exuberance.  Health and safety rules have rendered the open platform defunct. It may have been the "best of British", but its replacement doesn't come near it for excitement. Of course nowadays bus companies can' t afford drivers as well as the conductors who used to take fares on the Routemasters, a task performed now  by a morose driver who sits at the wheel,  his driving cab doubling as a ticket kiosk.

As many people know I don't spell very well. I can recognise mistakes, my own and others,  but not at the time of writing. Sometimes it pays off. The other day while talking to someone on the telephone I put together a video with the help of Picassa of our recent  walk in a bluebell wood. Seeing a means of sending it to YouTube I clicked the appropriate icon. And off it went. Or so I thought. I had taken no trouble with it, given it no thought and acted only on the spur of the moment. When I tried to look for it on YouTube, there was no sign of it.  But what I did find were scores of walks in English bluebell woods all looking the same by different photographers. Not a smidgen of originality in my project, half hearted as it was. Bad spelling meanwhile explained the absence of my album when I searched "bluebell" In mid-conversation, I had  misnamed it "Bluebelle wood."

On the blue swimming pool cover pigeons  walk on water. Every now and then,  they stoop to sip from a puddle.

I am sorry to hear that the open platform buses are no longer used. Last time I was in the UK, 1983, they were in use and I leapt (leaped?) onto a moving bus as you describe and found it equally exhilarating. As I wound my way up to the top deck I felt I had truly arrived in the "old country" my grandparents spoke of. I remember a funny exchange between a conductor and a bus rider with a puppy. The conductor felt he should pay the extra charge for the dog but the patron felt that as it was a puppy he should go free, in the same way a child rides free. The argument eventually devolved into what to my Canadian sensibilities could only be described as a class battle. I don't remember who won, but Thatcher was firmly in charge and the man with the puppy was certainly past the allowable age...