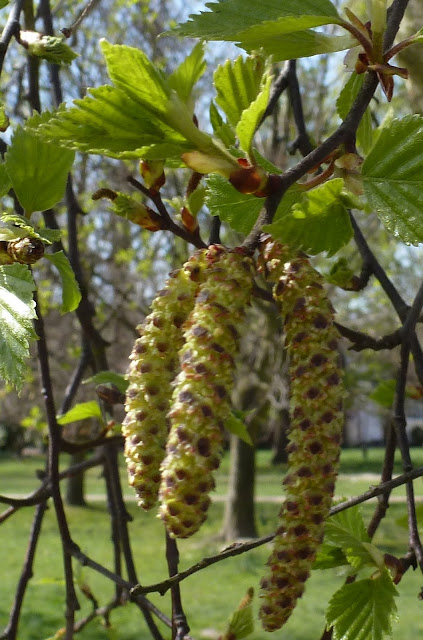 Season of catkins. These are  the male catkins of the silver birch. A pretty word, catkin. I once met a girl called Catkin Hazel. All I remember about her is her name.

Uni, short for university,  is a word relatively new to the English language. It was unknown in my youth but is now in general use. In fact the use of "university" sounds formal and stiff beside it.  It is I realise an example of apocope, the omission of a letter or letters at the end of a word to create a new word as for example when "curiosity" becomes "curio". It is I think something which happens much more in French than in English. Bac for example takes the place of Baccalauréat. And as an indication of its adaptability in French McDo even takes over from McDonald's. It is a feature which I rather like about the French language.

When  politicians and other public figures shake hands they are invariably invited to look at the camera, which they usually do with sickly grins on their faces.  When I edited a magazine I actively restricted if not banned  such photographss. It  struck me then and it strikes me still  that when you shake hands you should engage directly with the eyes of the person you are greeting.

Some French dignitary or other I read about this lunchtime was educated at The Institut d'études politiques de Paris. Better known as Science Po, and a good thing too.

"apocope" - now there's a new word for me. As for "uni" I've seen it elsewhere but not here in Canada, I don't think. I don't always care for this tendency to shorten or apocope words, but can one stop language from changing?

RR Perhaps French lends itself especially to such appreviations. They don't seem to come so easily in English.

M-L But they do of course. Uni is now virtually universal usage in this country. And there are several instances of longer words shinking into shorter ones as in curiosity - curio (referring to curio shops). I had a good one at the tips of my fingers just now but it is gone.