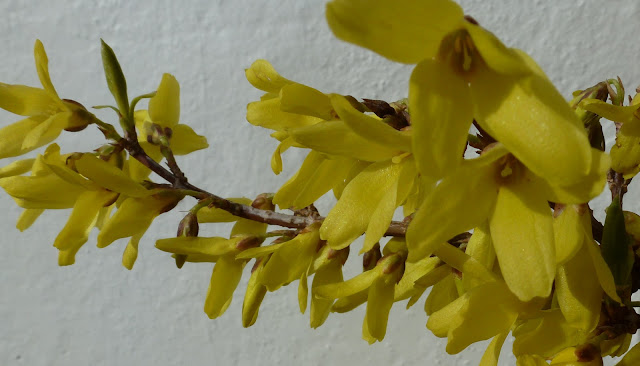 Here's forsythia, that most suburban of shrubs. It flowers before its leaves appear. Often untidy it needs a close look to be appreciated.

This morning I desperately want to hear the Countess' aria from Act 2 of The Marriage of Figaro. With the help of iTunes and the voucher which still has credit from Christmas, it arrive in minutes sung by Jorma Hynninen supported by the Vienna Philharmonic.  After listening to it twice I miss its
context; on its own  it begins to irritate. I want  narrative and continuity. So it is that choosing a piece of music at a given moment however wide and varied the choice, is a problem. Better, far better if you attend a concert  hall or opera house  for the full monty. Second best is to be sitting comfortably and play the  opera, symphony or chamber piece uninterrupted.  Still, I think I'll listen to the Countess again...surrounded if possible by silence, before and after.

A programme devoted to the late Colin Davies last night draws on interviews which he gave during his long career. Among  many delights the conductor reflects at one point, "If I were Prime Minister, before beginning work,  I would make  members of  Parliament sit down and listen to the first movement of a string quartet. It would stop them talking." Something makes me cheer out loud. I'm still cheering.
Posted by Unknown at 4:48 pm

Ah yes, but I needed to check. Porgi Armor. And I'm in a worse state than you are. It's 06.50, VR slumbers in the bedroom I recently vacated, and I'm going to have to make do with the translation. There are lots of them, you know, all subtly different (given the simplicity of the original) this one being better than the first one I Googled:

God above, hear my prayer.
Ease my pain and grant me peace.
Oh, return the love I've cherished,
Or give my aching heart release.
Oh, please let this torment cease!
Tell me why his love has faded.
Let me know in what way I can win back the man I married.
God of love, heed my cry.
Oh, heed my cry.
If my love is lost forever,
Then take pity and let me die.

But I could use the earphones. They're close to hand. Right. But which soprano? Callas? Nah, somehow she never got to me. Renée Fleming? I've wronged her; thought she was flash; but I'm come to love her. esp in Strauss orchestrals; I'll bear her in mind. Renata Tebaldi? It could be scratchy. Kiri? Alas she overstayed her welcome; if it's recent it's a no-no. Gundula Janowitz? The most hideous of first names, the most sublime of voices - belonging to the period (1980s) when I was dipping my toe into opera for the first time. Got to be her.

Tuck in the earphones to get proper stereo. Terrible to think of orchestral sound coming through these wretched twopenny-halfpenny things. Ahh, that first sustained note and I know it's going to be OK. The countess is not in the first flush of youth; it's got to be calm, reflective but yearning - an impossible combination.

Oh God, it's all over. But that's typical Mozart: 4 min 42 sec (inc. 80 sec of orchestral introduction) and then on to the next masterpiece. And then another, and another. Figaro is Masterpiece Pie as Colin Davis mentioned in the interview.

It's gone! So quickly! I'll try Renée, gorge myself silly on this wonderful slice of truffle.

Thank you for the translation. It saved me looking it up, and I couldn't remember where my CD with text was to be found. Translations one way or another are always going to fall short of the music which in some senses renders it redundant, particularly in the context of the opera it self.

Marja-Leena Something odd. I received an email with your comment which for some reason did not show up here. It is always good to hear from you, and I appreciate your appreciation of the idea of music in Parliament before proceedings begin.