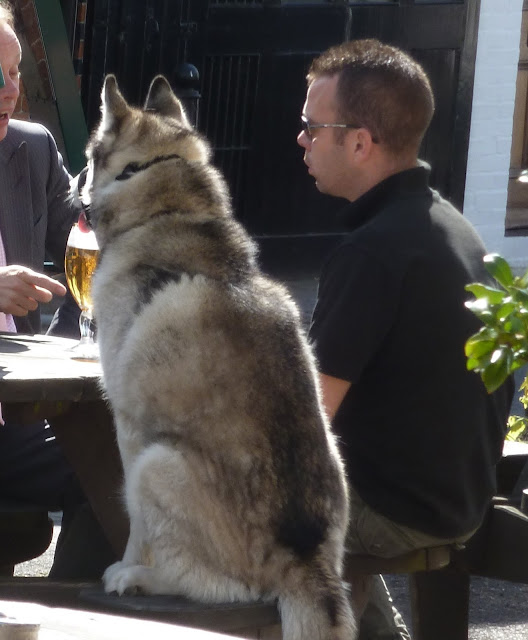 Joining in  the conversation outside The Compasses.

Just now the cuckoo pint is in flower.  It grows in the shade and in ditches.  It is also known as lords and ladies  because of the resemblance which the flower bears to human  male and female genitalia. The male flowers are boldly displayed on a long, fleshy axis or spadix, while the female ones are barely in evidence. The spikes of scarlet berries which result from their interaction in Autumn are more conspicuous than the flower. But  in the Spring the flower is more interesting sitting inside its large green and purple sheath or spathe, even if it doesn't grab the attention in the same way.

On the terrace outside the pub where we are having lunch a cocker spaniel, standard poodle (that's the big one with curly hair like an Airedale) and a basset hound, although on leashes, begin to socialise but with less circumspection than their home-counties owners. "Why do they sniff each other?" an on-looker asks.  "They' re doing what we do," says another, rather more dog-wise.

RR. I sometimes wonder about the value of comments versus hits.

The drinkers look like the philosopher and the wolf.

Your title was even more eye catching and amusing appearing in my sidebar with your initial mis-spelling of 'genetalia'. That's one way of upping your stats I suppose.

and needs to be sung to the tune of 'The Church is One Foundation'.

Ah Lucy. I got it right in the text and corrected too late I fear to miss your eagle eye. I must look up that song. Cheers. Oh those stats!