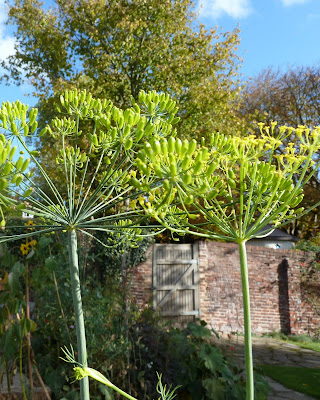 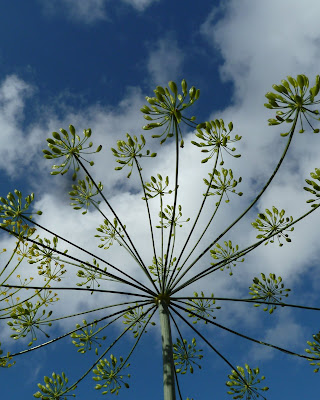 The dill which provided gravadlax earlier this year has now flowered and gone to seed. It has in its present state proved a useful addition to flower arrangements and will doubtless provide fragrant seeds for seasoning.

For the last few years collared doves with their delicate, grey feathers and the black collars, which gives them their name, have been around in one particular corner of The Grove.  Apparently they have only recently been common in the British Isles. We have also seen  them regularly in Spain where they have been longer established. I have photographed them in both places. Usually there is only a pair in  The Grove but today I see four  birds in  the usual place, and then flying down from the fence, a fifth.

The skate, which we had from the fishmongers the other day pan fried in butter with capers, was all that we had hoped. The pieces are  usually described as "skate wings", appropriate for a flat fish of the ray family. I am not sure what a whole skate looks like, but today  the "skate nobs" at the fishmongers, turn out to be skate cheeks. "We're trying them out," says the fishmonger, "they're a bit like scampi. We'd appreciate some feed back."
Posted by Unknown at 4:35 pm

Aware of collared doves you were, alas, ignorant of collard greens.

The doves have been around in the UK for about 40 years I'd say, they were becoming common about the time I started watching birds. Egrets have been appearing on the south coast for perhaps 20, I couldn't believe it when they first showed up in Devon when we lived there. There will be Sacred Ibises on the Thames estuary next!

Collard greens I have often wondered about, having encountered them only in American fiction! They sound mouth-fillingly tasty.

I've bought 'joues de raie' and often wondered if they are the same as skate knobs. Seems to me knobs and cheeks shouldn't really come from the same bit of the creature... They are a bit like scampi, thanks for reminding me of them, I'll look out for them again.

Sadly, Skates are related to Sting Rays and other Rays and sadly are on the endangered species list.
http://www.greenpeace.org/international/seafood/red-list-of-species

BB and Lucy I shan't rest until I have had a dish of collard green preferably augmented by corn bread and mollases, hominy grits, peanut butter and jelly and something which I once tasted but vowed to avoid in future called angel cake.

CC I feel sad about the threat to sting rays and to other vulnerable types of ray, but as I understand it, the humble skate is one of those fish the existence of which is not threatened in the waters round the British Isles. (We are warned off other former staples, such as herring and cod).
There is indeed something very beautiful about the giant rays which move through the sea, flapping their wings slowly with surpassing elegance. If I felt I was threatening them, I would gladly forego their wings and cheeks, nobs and all.

I was very depressed to learn, not only from the Greenpeace list which I rather feel is somewhat over-zealous in its blanket proscriptions, but also the more detailed, informative and judicious Marine Conservancy Council one (http://www.goodfishguide.co.uk/), that CC is right, and skate are in the top rank of most endangered fish stocks.

Damn. I too thought they were something we could enjoy with a clear conscience, nobs and all, but no. I feel very conflicted (as the modern idiom goes) about buying certain fish, tending to compromise myself by thinking that as that delicious looking morsel has already been caught and got as far as the slab then I am not helping anyone by refusing to buy it and letting it go bad and be thrown away (especially since it's usually knocked down for a quick sale by then anyway). But of course that only means they'll go and catch more...

But I feel cross that it's not primarily our (I speak for many I'm sure) modest, thrifty and appreciative consumption that's at fault, most of us would be quite willing to tailor our eating habits to sustainable practice, but first and foremost mismanagement and worst of all the iniquitous practice of quotas and discards.

So I am as often miserable as delighted at the fish counter, and the puny, watery, undersized infant cod fillets I see there I no longer touch. But, a redeeming glimmer, herrings are OK! As indeed are mussels, and, perhaps there is a god, oysters!

Oh, and collard greens also feature in the inimitable 'Joy of Cooking' but the line drawings are very vague and don't convey much impression.