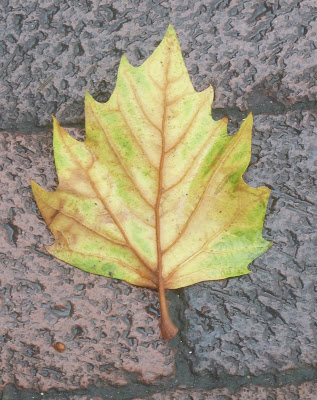 The tree in the leaf.

In these Indian summer days the sounds of people at work with tools as they fortify their houses against the coming winter are everywhere. The tools seem to imitate the noises that animals make: the hiss of sandpaper; the whistling and screaming of drills; the cawing of saws. On top of that when the rubbish disposal vans arrive, there is the anguished bellowing of hydraulic cylinders as they tip  and empty wheelie bins into the belly of the van.

There is a story in The Compasses that the chair against the bar beside the door is unlucky. Several of its regular occupants have met an early death. A good reason  to avoid it, but few of the perpetrators of  the myth are superstitious. Rather  they are driven by a gift for story telling. Today some one tells the man who is sitting there quietly doing the Telegraph crossword about the story.  "You don't like me do you?" he says laughingly to one of the myth-makers; "you never told me. Never mind, I'm not superstitious."  "He's a journalist,"  someone say, as we watch him he walks off with his Telegraph. " He's a clever man."
Posted by Unknown at 4:45 pm

In town here, there is a greasy-spoon called The Lucky Spot. Perhaps that place at the bar, or the chair, should carry a small brass plate, titled "The Unlucky Spot."