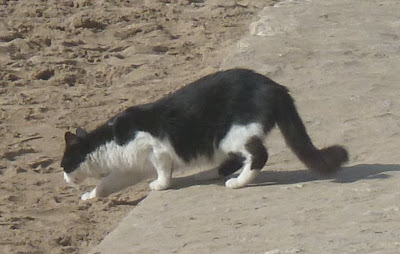 Exploring the beach at Sitges.

When ever I hear economists and bankers talking about the state of the economy I think of fog, old fashioned sticky fog writhing round lamp posts and chimneys, visibility about 8ft. So it is with some amusement that I see in the window of Maplin, the electronics shop, a fog machine. No need for one; just switch on a current affairs programme or read the newspapers.

In the supermarket my trolley tries to run away in a crowded aisle. I steer it away from an impending collision. "Well caught, " says the man with whom it has nearly collided. For a moment I hear clapping from the boundary, the unmistakable sounds of cricket.
Posted by Unknown at 5:35 pm

Your photo is intriguing, makes me wonder what cat thinks, experiences, with one paw in soft sand and three still on hard walkway. Its posture makes me think it has paused in its steps because of conflicting signals its feet are sending to its brain.

Did it actually pause in its journey, or was this image purely the product of the shutter?

Regardless, this is a good photo, Plutarch.

I was watching the cat tentatively approach the beach. You're right it was not quite sure of itself. I had never seen a cat on a beach. This one didn't like it very much.