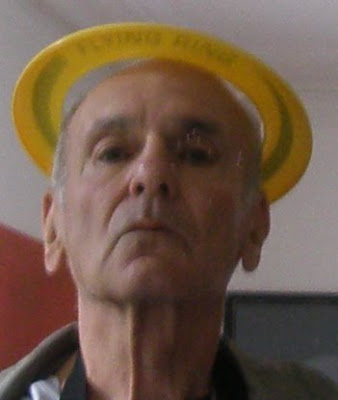 Sometime ago my brother Ken gave me a toy called a flying ring. I didn't realize until I put it on in how high esteem he must hold me. Though I have no aspirations to sanctity even to sobriety, it seems to fit like a glove.

The road that climbs the hill that leads from the station to The Town Hall and civic complex in the centre of Tunbridge Wells is lined on both sides by shops and restaurants. To the right as you ascend, these establishments tend to be more substantial. The reason is to be found in the alley, called with some pretension, Mount Pleasant Avenue, which runs parallel to it, and which allows the shops to have rear entrances and areas where dustbins and like can be be kept. I often take this road rather than the more populated one, because of the contrast between back and front, the sight of rusty railings and peeling paintwork and overspill from the commerce in front - a shoe for example left on a window ledge - shop assistants sitting on a step for a smoke, pipes, cables and ventilators, fire escapes  and   service units of one kind or another. Emerging from some of the kitchens there is invariably the smell of grills and stir fries, pizzas and sauces, and from other back rooms,"The smells of dust and eau de Cologne..".

What happens to the acorns in The Grove? Last year I could find none, nor any this year. Yet there are several oak trees lining the paths. Today walking on a road far from The Grove I tread on acorns aplenty. The the obvious hits me. The squirrels in The Grove eat the nuts or bury them. I seldom pass a squirrel at this time of year which is not sitting upright, its little hands together in front of its stomach as though in prayer, but in fact holding an acorn which it nibbles at speed. If they are are not eating them they are doubtless burying them.

Ah yes, a saint! We thought of you and Heidi this morning during a chat with our UK daughter, when she mentioned that they in your town yesterday! Apparently it's only about 30 to 40 minutes by car from their village.