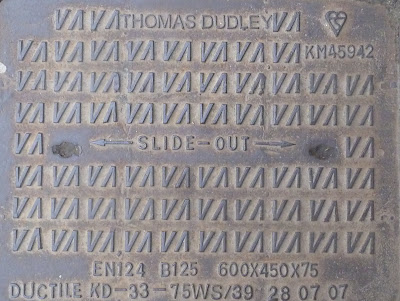 Metal plaque from 20Th- 21st century discovered in Tunbridge Wells. Purpose uncertain. The significance of the  figures, the hieroglyphics and the instructions, "slide out" and the arrows pointing in both directions is the subject of debate among archaeologists.

A man is breaking up and burning fallen branches and brushwood on The Common. I ask him if I can take a photograph of the fire, "Why?" he says.
"Because I like bonfires.
"What do you want a photograph for?"
I take photographs all the time." I avoid the word hobby: "It's a pass time."
"Well, I don't want to be in it"
"That's all right," I say, "I don't want you to be in it".

As I take a quick short of the fire excluding its guardian, I think of the French film I saw years ago, where a visitor stands before a  log fire in a room  in a  medieval castle. We don't know his identity, but when he puts his hands out towards the fire, and the flames lean eagerly towards him, he is immediately identified as The Devil. That's me I think, and steal another shot.

Passing the window of a house this morning, I spy a bookshelf, and that urgent curiosity which besets me so often, makes me want to look into the room and read the titles. I am not proud of it. But it is so deeply rooted that it surprises me sometimes when others do not share similar urges. Perhaps they are better brought up and are bred not to stare and not to look. How much they must miss.

Oh, you are doing a series on 'street furniture'! You know how excited that makes me, and seeing the name 'Thomas Dudley' which was on a few of the ones I photographed in London almost two years ago! This one looks very new.

I've noticed yours of course and like the way you group them. I posted some a couple of years ago, but they still fascinate. It occurs to me that you could make rubbings from them.