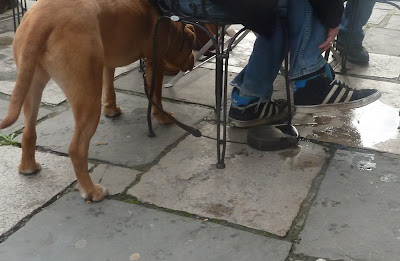 Feet outside The Ragged Trousers in The Pantiles.

He holds a bag of chips a little in front of him as though it is an offering, something sacred. But its contents are for him rather than for a deity. He wears a mauve anorak . The woman who is with him wears a green one.   She is talking... talking.. The man says "yerghe... yerghe".  In the intervals  he pushes chips into his mouth, one by one.

By my definition lads are in their 20s or early 30s, proud of their cropped hair and beer bellies and are not modest about their opinions. They are football supporters. Two lads are walking in the The Grove. They are talking loudly to one another. One is pushing a pram with a child in it - a distinct anomaly.  They are talking loudly to one another. Each lad, more in character, has an almost full pint tankard in his hand.

"a distinct anomaly". They do breed, don't they? But only accidentally. Match of the Day is shown so late in the evening it may well inhibit reproduction.

You may be flattering them by referring to "their" opinions: they take comfort from recycling others'. If their enthusiasm for soccer were surgically removed what would be left? Perhaps a chant: "We are the voidies."

I must confess I like the Millwall chant: "Nobody likes us. We don't care."

The baby indicates that one to be a New Lad.