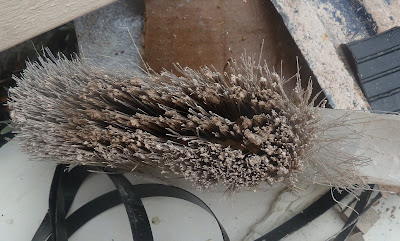 A brush discarded in a skip.

Describing trade and cultural exchanges between countries bordering the Indian Ocean in  A History of the World in 100 Objects, Neil MacGregor concludes that  "seas usually unite rather than separate the people who live on their shores.

I have thought, though I am as guilty as most other people of neglecting it,  that  the value of silence in conversation is too much ignored.  Today I find that  Jonathan Swift  is of the same mind. "They have a notion," says Gulliver of the Houyhnhnms, the superior race of horses, whom he encounters on the last of his voyages, "that when people are met together, a short silence does much improve conversation: this I found to be true; for during those little intermissions of talk, new ideas would arise in their minds, which very much enlivened discourse."
Posted by Unknown at 5:48 pm

The title alone of this post is intensely inviting...

I thought so to and nearly let them stand on their own.