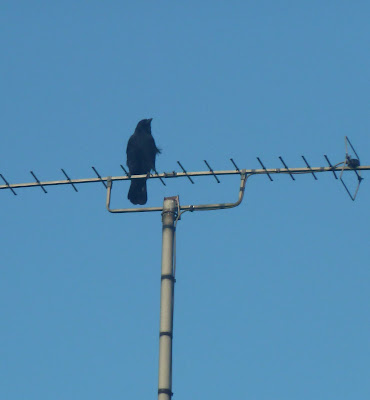 Another use for television.

In the train two women natter in the seats opposite me. They speak of their children and other people's children with all the fluency of motherhood. Referring to one child, one  of the women begins "He's ...." and searches for the right word  "...artistic." "Yes, says her companion  "... he's a bit computery." Two terms which do not necessarily go together.

I am not often in London on a Sunday. So I don't notice that there appears to be a shortage of buses in The Strand opposite Charing Cross station. It is beginning to rain. I register the sound of music drifting over from Trafalgar Square. As I wait at the bus stop, an American woman under an umbrella walks past and says to me: "The buses aren't running. They've stopped the buses." And so they have. I thank her. "I just wanted to pass it on to some one." she says. In the taxi, the driver says to me: " It's St Patrick's Day. They've stopped the buses in Trafalgar Square".  In Dublin perhaps. In New York, perhaps? St Patrick may have expelled snakes from Ireland, I think to myself.  But to stop London buses. Is this something new?
Posted by Unknown at 4:17 pm

Had an unexpected interruption here in Philadelphia last Saturday due to St Patrick as well. As far as I know St P never crossed the pond. The faux Irish pub across the Street held an outdoor raucous drunken ruckus for college students decked out in green with nothing better to do. Lasted all day and into the night. Could hear the noise 37 stories up with windows closed. As long as the faux pub made money......;~/
Only in America.