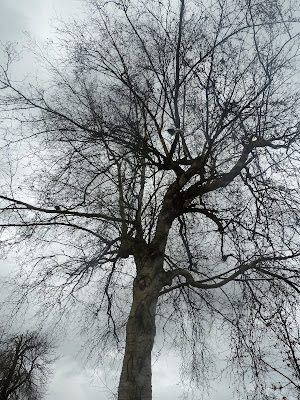 Sad but considerate. The Council has placed a notice on this silver birch to say that it is to be cut down owing to something called decay fungus.  A maple is also to go. The Council gives a lot of care to The Grove, and regularly plant more trees than come down. It was always, true to its name,  a place of trees, say local historians. It occupies a piece of land on a hill top, given to people who live nearby the Earl of Buckingham in 1703.

Son-in-law Dominic and grandsons Josh and Rowan run across The Grove throwing an undersized rugby ball to one another, while I walk  behind, sedately, but impressed by their agility and sense of timing.

I try to transcribe the noise made by wood pigeons, of which there are a lot round here. It starts early in the morning and, at this time of year, seldom lapses during the day.  It is something like "coo, coo, coo, coo, cu." There may be more initial "coos", but it invariably ends with a definitive almost staccato sound, shorter than a coo, as if their concentration has been broken.

Dredged up from memories at least 65 years old. It isn't an accurate rendering of the sound you were looking for but I hope you're comforted by the fact that you're not the first to have had a go. Now I re-read it I find the surrounding text rather horrible. Perhaps it has oddity value.

From out of a wood did a cuckoo fly,
Cuckoo.
He came to a manger with joyful cry,
Cuckoo;
He hopped, he curtsied, round he flew,
And loud his jubilation grew,
Cuckoo, cuckoo, cuckoo.

A dove settled down upon Nazareth,
Tsucroo.
And tenderly chanted with all his breath,
Tsucroo.
"O you," he cooed, "so good and true,
My beauty do I give to you –
Tsucroos, Tsucroo, Tsucroo."

I think we just have to accept the fact that our vocal arrangements are far removed from those of pigeons. What I tried to confine myself to commenting on is the sound at the end of the repeated phrase. Thanks for the carol.

There is a pair of mourning dove that nest in one of my trees, who make the lovliest sound: coo, coo, coo-di-di-coo, coo. (Or so it sounds to my ears.)