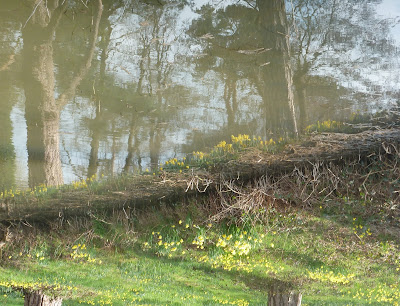 I open small packets of Italian tomato seeds and optimistically sow them in small pots scarcely believing that such insubstantial flakes will germinate and eventually produce the colourful fruit depicted on the packet. Because basil is so good a culinary companion for them, the seedsman has included a packet of basil seed with the tomatoes. I  sow this a well, with a like sense of optimism.

This afternoon, with a gentle rain outside the window, I read about the youthful impulse to revolution in the Sixties. It is the history of a time I can remember. Though revolutionary myself only by inclination,  I was and still am conservative by nature. I  remember, almost with nostalgia, the excitement of the time, students uprooting lamp posts in Paris and the black-clad riot police advancing with shields and batons on the cheerful crowd. In an epigraph to the chapter, The Spectre of Revolution, Tony Judt (it is his book Postwar that I am reading) quotes Daniel Cohn-Bendit: "The Revolution - we loved it so much."   In explaining the search to expand the principles of Marxism, he later quotes an early essay by Marx himself: The philosophers have only interpreted the world in various ways; the point however is to change it." Therein lies the spark that ignites youth, the urge to change the world and above all to act rather than faff about. Even now it touches a fuse, which, even when "to be young was very bliss", in my case was to fizzle out.

I love the upside-down reflection pictures.

I think the phrase "cheerful crowd" is spot on. I remember an account of Ginsberg chanting "Om Mane Padme Hum" as the police advanced with batons at the ready on the peace demo he was in. In the sixties it was a kind of inner faith that things could be changed which was the driving force...